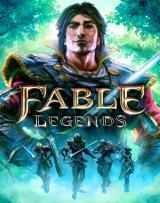 â€œFable Legendsâ€ unites the classic gameplay that players have come to love from the series with all of the next-generation capabilities of Xbox One. For the first time, grab your friends and go on adventures - up to four Heroes can cooperatively discover the quests and stories of Albion. Or, play the villain where you can mastermind the game in real time. â€œFable Legendsâ€ takes advantage of the graphical processing power of Xbox One, and when coupled with Unreal Engine 4, delivers a rich and beautiful world.

Rediscover The Magic of Fable
Return to Albion, a picturesque land full of thrilling stories, exciting combat, and high adventure. Itâ€™s no surprise that millions of players have visited and adored the welcoming countryside of this once upon a time storyland. â€œFable Legendsâ€ brings you to a place where history, myth, and folklore are practically the same thing. Of course youâ€™ll also find monsters, villains, and even the occasional disaster, but you shouldnâ€™t take it too seriously. Albion is a unique fantasy land where epic, tragic, and comedic stories all combine for a one of a kind experience.

New Ways to Play the Hero
In â€œFable Legendsâ€, youâ€™re never completely alone. You can play the game single player, with a party of three heroic AI companions that follow your lead through stories and adventures. Or you can play cooperatively with up to three friends and discover the gameâ€™s quests and content together. Play whatever style you want, when you want. After all, youâ€™re the Hero. And just what kind of Hero you choose to play is up to you. â€œFable Legendsâ€ takes you back to a time when Albion is teeming with Heroes, so thereâ€™s bound to be one for you. Fearless warriors. Cunning tricksters. Masters of Will. Paragons of virtue. Heartless mercenaries. Intoxicated brawlers. Chicken chasers. Theyâ€™re all here, and many more besides. Youâ€™ll be able to customize your abilities, alter your appearance, and advance your Hero by earning experience and finding new armour, weapons, and treasures.

Or Is Evil Your Thing?
Fable has always presented opportunities for mischief and villainy, and in â€œFable Legendsâ€ weâ€™re going to offer a way to play the bad guy as never before. The Villain player takes control of the many creatures, minions, traps, and environmental hazards that Heroes must overcome. Villain play combines elements of strategic decision making and tactical control. When those pitiful Heroes enter an area, youâ€™ll choose which minions are sent into battle and where to place these creatures to maximize their effectiveness. Once the fight begins, you issue the orders for your creatures to execute: telling them where to go, which Hero to attack, and what abilities to use to ensure your evil plans come to fruition.

Expand Your Controls through SmartGlass
As a Hero, you can use SmartGlass on your tablet or smartphone to track your game progress, get more information on Heroes, quests, and other content. As a Villain, youâ€™ll be able to use a SmartGlass-enabled device to play as the Villain when youâ€™re in the same room with your Xbox One. In this way, you can play right next to a Hero player in couch co-op.

Lionhead Studios - A Misstep for Microsoft

Back in 2016, Microsoft disbanded Lionhead Studios, the team behind the Fable series. But with a new Fable game on the way, a...

The Fable Franchise May Have a Future, After All

Back in July, Flaming Fowl Studios released an early access/preview version of Fable Fortune, and the CCG/RPG crossbreed has ...

Lionhead Studio Closure Was Unexpected, Buyers Lined Up After Announcement

Eurogamer has just published a fantastic piece on the history of Lionhead that covers everything from the studio's start to ...

More than a month ago, we reported on the cancellation of Fable Legends and the "proposed closure" of Lionhead Studios, an in...

Fable Legends Was Far From a Disaster

The Microsoft website brings us a statement with nothing but bad news today. The free-to-play co-op/PvP title Fable Legends, ...

The Power of DirectX 12 Video

While not specifically RPG-related, it's worth noting that Microsoft's new promotional video for DirectX 12 on Windows 10 (an...

Lionhead Studios director Stuart Whyte talks at length about Fable Legends, its place in the long-running series, the possibi...

To keep our eyebrows raised and interest piqued, the team at Lionhead Studios has kicked off a series of videos that are mean...

The developers at Lionhead were hoping they'd be able to release the open beta of Fable Legends, their free-to-play Xbox One ...

In his latest RPG Scrollbars column for Rock, Paper, Shotgun, Richard Cobbett discusses the various games that attempted to i...

Gamereactor has finally gotten around to wrangling up a nearly eight-minute video interview with Lionhead's David Eckelberry ...

Lionhead Studios' Fable Legends enjoyed some additional exposure at this week's E3 event by way of a new nearly-two-minute tr...

The Xbox One- and Windows 10-exclusive, free-to-play RPG Fable Legends is the subject of a handful of new previews, thanks to...

Citing the need to make Fable Legends "available to as many players as possible", Lionhead Studios announced that the 4v1 asy...

Along with the bevy of other announcements they made during the Windows 10 consumer preview event today, Microsoft and Lionhe...

Now that the closed beta of Fable Legends has started, the folks at RPGSite bring us a hands-on preview of the title. Their i...

A post on the official Fable Legends website reminds us that closed beta testing for the RPG's multiplayer component starts o...

Xbox One owners just might be interested in learning that a release date for Lionhead's co-op focused Fable Legends has been ...

The E3-based previews of Lionhead's latest Fable instsallment continue to roll in, with this past week producing several new ...

We have rounded up a fair amount of Fable Legends previews, interviews and gameplay footage, courtesy of the just-concluded E...

The official Lionhead Studios blog is featuring a screenshot-laden profile of the Redcap, a new type of creature that they've...

Not only will Lionhead's Fable Legends feature a "villain mode" to spice up our curiosity toward the action RPG, but it will ...

Eurogamer's Wesley Yin Poole has penned a fairly lengthy interview/feature on the Fable series based on a visit to the Lionhe...

We'll be seeing another installment to the Fable series later this year, and to give us some more information to chew on in t...

The Best Videogames of 2014 and Beyond

Forbes' contributor Erik Kain has put together a list of what he considers to be the most interesting upcoming titles, which ...

There's a new interview with Lionhead Studios' David Eckelberry on IGN Benelux that covers the team's return to what made the...

Even though Peter Molyneux has moved on from Lionhead Studios, there are plenty of people interested in hearing his thoughts ...

While I can't say I think the Fable series ever did moral choices well, those players that appreciated Lionhead's past attemp...

While we're on the topic of Lionhead's Fable series, I thought I'd point you over to this article-style interview on GamesInd...

It's time to chalk up some more Gamescom-based coverage for Lionhead Studios' Fable Legends, and this time it comes to us in ...

There's a new preview for the recently announced Fable Legends over at IGN, which calls the title an extraordinarily ambitiou...

Lionhead Studios has just published a FAQ for their upcoming Xbox One exclusive Fable Legends, which promises to add co-op on...

The game was only just announced yesterday, but that hasn't stopped a couple of gaming sites from offering up some Gamescom d...

To complement today's announcement of Fable Legends, the next installment in Lionhead Studios' popular RPG franchise, the fin...

Fable Legends Announced for Xbox One

Pretty much no further news beyond the title as of now, given the Microsoft conference for Xbox One at Gamescom isn't being s...