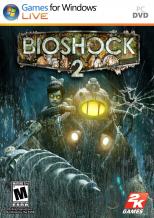 BioShock 2 is the follow-up to BioShock, the so-called spiritual successor to System Shock 2.Â  Developed by a different team than the first BioShock, BioShock 2's story continues where the first game's left off, and features nearly identical gameplay, in the form of first-person shooting combined with an RPG-lite character progression system.Â  Unlike the first game, it offers up more moral choices and a more nuanced ending based on them, as well as tweaked combat and an overhauled research mechanic.

BioShock takes place after the fall of Andrew Ryan and Jack's departure from Rapture.Â  Players take the role of Sigma, one of the first Big Daddy prototypes, who has been mysteriously brought back to life.Â  Guided by visions from a girl named Elanor, the player must find her and rescue her from the clutches of her mother, Sophia Lamb, who has since moved in to fill the power vacuum left after the first game.Â  The player also has the choice to kill or spare several key plot antagonists, allowing for the ending of the game to vary beyond the simple good/bad seen in the first BioShock.

The gameplay in BioShock 2 is nearly unchanged from the original.Â  The player now has the option to use a wider variety of weaponry, and Plasmid powers can be dual-wielded with weapons, allowing for their quicker use in combat.Â  As before, audio diaries are collected to provide insight into the story and characters in the game, and the player will visit several seedier locations of the city, including its red light district. Â  Hacking and research have also seen changes to make them faster and more enjoyable.Â  As a Big Daddy, the player has the option to not just save or harvest Little Sisters, but also guide them around Rapture to obtain even more ADAM for purchasing skill upgrades, and there are more opportunities for brutal melee combat as a result of the player's increased size and strength over a regular human.

BioShock 4 - What It Needs

There were recently rumors swirling about the potential Antarctic setting of the next BioShock game that may or may not launc...

Arkane Studios, the French team that you probably know for either their older titles like Arx Fatalis or their newer immersiv...

If you visit GOG.com between now and November 4, 2019, you'll be able to purchase a great deal of heavily discounted horror-a...

BioShock and BioShock 2 Available on GOG

If you're in the mood for some DRM-free story-driven shooting with RPG elements on top of it, you'll be pleased to know that ...

The latest of Richard Cobbett's RPG Scrollbars columns talks in detail about the intricate process of creating fun, memorable...

Raphael Colantonio, the founder of Arkane Studios, has decided that it was time for him to leave the gaming industry to spend...

BioShock: The Collection has received updates for the consoles as well as the PC, addressing a number of issues the new editi...

Irrational Games is responsible for some amazing video games, including System Shock 2, the Freedom Force series, and the Bio...

Digital Foundry has published a comprehensive analysis of the performance and the technological makeup of the BioShock remast...

With an official announcement on Steam, a 2K rep outlined some plans to fix some of the issues present in the BioShock and Bi...

The folks at Destructoid have penned PC port report for the new versions of BioShock 1 and 2 that came together with the rele...

Inside the Making of BioShock Series with Creator Ken Levine

From System Shock spiritual successor to a mega franchise all on its own, there's no doubt that BioShock will be remembered f...

BioShock: The Collection Out Now

The remastered versions of BioShock, BioShock 2 and BioShock Infinite are now available on PC, PlayStation 4 and Xbox One, ei...

The 2K Games blog not only brings word that BioShock: The Collection will launch this coming week on September 15th, but it a...

In case you were wondering how the remastered BioShock: The Collection stacks up to the original titles, you'll want to check...

BioShock: The Collection Announced for PC, PlayStation 4 and Xbox One

While remasters were already popular during the PlayStation 3 and Xbox 360 days, they've really taken off with the current c...

Why is Video Game Lore So Awful?

In a new editorial posted over the weekend, Eurogamer points to the way in which lore is delivered to us in video games, call...

From First to Third: How Gaming Perspective Changes Everything

The team behind the isometric horror title Stasis has cleverly created a number of mock screenshots demonstrating what BioSho...

The text of this farewell blog post by Irrational Games founder Ken Levine doesn't necessarily spell the end of the respected...

We haven't heard from the BioShock 2 Protector Trials and Minerva's Den DLC for PC since October of last year, when they were...

We've seen Irrational Games' BioShock at a $4.99 price point before, but I'm not sure that we've ever been able to pick up bo...

Saints vs. Sinners: How Do You Play Games?

In a new "Saints vs. Sinners: How Do You Play Games?" piece, IGN Australia examines the moral decisions that were available t...

If you still have interest after months of delays, 2K's Elizabeth Tobey posted on the official forums to notify us that the ...

The second day of Steam's holiday sale is upon us, with this latest batch of deals being much more RPG-oriented. Most of yes...

BioShock 2 DLCs and Patch to be Released on PC

2K Games has come back on the decision we reported on earlier to skip a PC release of Minerva's Den and the Protector's Tria...

A post from 2K Games' Elizabeth Tobey on the official forums gives us a status update on BioShock 2's patches, and slipped i...

Minerva's Den And The Salvation of Narrative DLC

Writer James Bishop editorializes on Gamasutra on the problems of building a narrative DLC, how BioShock 2's Minerva's Den su...

Gamasutra interviews Steve Gaynor about the Minerva's Den DLC in BioShock 2, discussing the challenges of adding an independe...

The hacking minigame in BioShock 2 was broken for colorblind people, a problem the publisher has solved, but not in a patch, ...

2K Games just sent us over a press release announcing the immediate availability of Minerva's Den, their story-driven piece...

With the Minerva's Den DLC for BioShock 2 coming in a few days, here's a load of previews to help you decide if you have any ...

Joystiq brings word that we should expect the BioShock 2 DLC Minerva's Den on August 31 at a $10 price point. The release is...

Irrational Games' Project Icarus has been revealed as BioShock Infinite, an indirect sequel to the series that originally beg...

2K Games kicked over a press release earlier today announcing Minerva's Den, a "final" and "narrative-driven" set of DLC for ...

2K Games kicked over a press release today announcing the release of Protector Trials, a third set of DLC that adds new singl...

Valve is hosting what looks to be an insane new "Perils of Summer" sale on their Steam digital download service, with the fir...

BioShock 3: Why 2K Should Wait

Assuming that 2K Games is already working on a BioShock 3, IGN has whipped up a two-page editorial that asks the publisher to...

Am I Evil? - Moral Choices in Video Games

The guys at Thunderbolt have conjured up an editorial called "Am I Evil?", during which they examine the moral choices that v...

When a new video game receives DLC shortly after its release, it's not unusual for fans to accuse the developer/publisher of ...

As promised last week, 2K Games has released their Sinclair Solutions Tester Pack DLC for BioShock 2 on both the Xbox Live Ma...

BioShock 2 reviews have naturally continued over the past few months, so here's a selection of insights on 2K Games' sequel t...

The 15-Year Evolution of BioShock

The Kartel has published a brief history of the System Shock and BioShock franchises while also following the evolution of th...

2K Games have released a bunch of screenshots for their upcoming DLC, showing off the additions this DLC brings to multiplaye...

2K Games sent us over a press release this afternoon announcing that their Sinclair Solutions Tester Pack DLC for BioShock 2 ...

Between IGN and VG247, we can glean all the information we need from Take-Two's fiscal 1Q 2010 conference call earlier today...

2K Games has released patch 1.0.0.2 for BioShock 2, which finally fixes the widescreen issue the game inherited from its pre...

A lot of game reviewers were interested to see if BioShock 2 could reach the plateau of its predecessor. Being made without K...

2K Games just fired over a press release announcing an "aggressive" plan for post-release BioShock 2 content, starting with a...

GamerNode interviews Ken Levine to ask him - amongst other things - a few questions about BioShock 2, only apparently he has...

As we round up another batch of BioShock 2 reviews, it's pretty clear the general response is "good/great, but doesn't fully ...

The first patch for BioShock 2 has been released. It has caused a new multiplayer problem they're hotfixing, but otherwise ad...

BioShock 2 seems to have some minor hiccups that could potentially bother your playtime. Nothing major from the looks of it, ...

It's time for a full rundown of BioShock 2 reviews and no surprise, there's a stack of 'em. Reactions so far seem to be very ...

Another "how difficult is it to follow up on such a great game" interview for BioShock 2 is available. An odd tenor to pick, ...

My guess is that much of what made BioShock the spiritual successor to System Shock 2 is absent from the sequel, but, regardl...

Alec Meer, who earlier reviewed BioShock 2 for IGN, now does a Wot I Think at Rock, Paper, Shotgun. He explicitly notes he's...

Destructoid offers a track list for BioShock 2, featuring jazz and pop classics from the 30s, 40s and 50s like its predecesso...

The magazines and bigger sites have unpacked and played their review copies of 2K Marin's BioShock 2, and the first reactions...

With the release of BioShock 2 only a week away, a brand spanking new launch trailer debuted at Jimmy Fallon's show last nigh...

GameSpot presents us with a special edition unboxing video for BioShock 2, as 2K Games sent out a press release detailing th...

In preparation for BioShock 2's launch next week, several of the editors over at IGN have taken a moment to reflect back on t...

If you're the kind of cat that's still into paper game guides, you should know that 2K Games has contracted BradyGames to mak...

In addition to some new BioShock 2 multiplayer footage on Voodoo Extreme, MTV Multiplayer brings word of what sort of content...

Spike TV has revealed the nominations for their 2009 Video Game Awards, though there really aren't many titles that we're con...

After taking in the new BioShock 2 video interviews on Giant Bomb and G4, you can proceed to the following sites for some han...

There must have been some sort of embargo lifted today, because it seems like every major site has suddenly published hands-o...

Entitled "Capture the Sister" (or "Capture a Sister"), the latest trailer for BioShock 2 shows an instructional video depicti...

A new trailer is available for BioShock 2, showing off a variety of gunplay and enemies, as well as a sequence of the protago...

The folks over at Gamestyle have penned a quick preview of BioShock 2, 2K Games' follow-up to 2007's popular FPS/RPG-lite hy...

2K Games fired over a press release this morning announcing plans to release their BioShock sequel on February 9th, 2010.  I...

2K Marin's BioShock sequel is the subject of yet another preview, and this time it's over at SFX360.Considering the fact that...

OXM has slapped up a five-page preview of BioShock 2 after receiving a demonstration of the sequel from 2K Marin creative dir...

Remember Jhonen Vasquez's creepy artwork of two Little Sisters and the Big Sister from BioShock 2? Well, that same artwork is...

In addition to a new BioShock 2 preview on YourEMGN, 2K's Cult of Rapture website brings word that pre-ordering the game from...