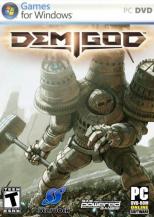 The all father has vanished, creating an opening in the pantheon. To fill the void, Demigods from across from the mortal world must wage war against one another in a bid to ascend to true godhood.

Set in a magical world where gods walk among mortals, Demigod blends action, strategy and role-playing elements into a thrilling new experience. Select the Demigod that will lead your minions into battle and unleash the dogs of war against your rivals. Your Demigod will do whatever it takes in order to ascend to true godhood.

Once in the Arena, each Demigod will be joined by support troops that fight to the death as you struggle to seize key control points and slowly turn the tide of war in your favor. And your Demigod will level up during the course of each battle, becoming even more powerful as you unlock new abilities and powers. It's a brutal conflict of Demigod versus Demigod, where the very ground beneath their feet will tremble and quake.

Demigod is a real-time, tactical strategy game that includes extensive role-playing elements. Choose from several Demigods, each poised for battle with their own unique capabilities and awe-inspiring powers. Vanquish other would-be gods as you gain levels, increase in power, unlock the power of mystic artifacts and slowly battle your way closer to joining the Pantheon.
Key features:

â€¢ Your Demigod is the focus of your power in the arena. Each of the 8 included Demigods has unique powers and abilities.
â€¢ Like a role-playing game, players can purchase equipment for their Demigod, add new powers to their Demigod as it gains experience, acquire artifacts that remain persistent between games. Each Demigod plays differently enough that it provides a diverse gaming experience.
â€¢ Like a strategy game, players have strategic objectives in each arena that, when captured, provide resources that give access to better units and some Demigods have the ability to summon their own minions that they can individually control. There are gold mines that can be captured to give more resources, artifact shops that, if captured, make their resources available to your team.

Battle in a persistent online world in multiplayer or play single player either in a skirmish or in the virtual tournament.

â€¢ The on-line pantheon allows players to "skirmish" against other players of similar skill or take part in the on-line Pantheon tournament where players choose the path of light or darkness and earn favor points to help their faction win the tournament. Players can also play on the LAN or play custom games with friends on the Internet.
â€¢ Players earn favor points through victory with different awards given for different achievements during the game. These favor points can be used to purchase special items that exist from game to game.

Increase your Demigod's powers and abilities by leveling up during each battle.

Wage massive, earth-shattering battles across a series of awe-inspiring Arenas.

â€¢ Demigod makes use of the same awesome technology as Supreme Commander. However, it has been greatly enhanced with Gas Powered Games' new "mesh" technology that allows the game to have incredible visuals even on older video cards. The arenas in Demigod are not your typical "maps". Instead, they have each been crafted as a full blown 3D model unto itself in which players battle on the surface of them.

Seize key, strategic positions on the map and turn the tide against your enemy. Push deep into their base and destroy them once and for all.

â€¢ Key resources in an arena are controlled by capturing the flag associated to that resource. When a player controls that resource, the entire team benefits. Controlling flags also generates war points which are added to your team's war score. When enough war points are collected, new upgrades in the team's Citadel become available for purchase.

Stardock is celebrating their 20th anniversary with 50-75% sales on all of their products in-house and on Steam, so while you...

Chris Taylor on the Fall of Gas Powered Games

In episode #182 of his "Matt Chat" video series, our friend Matt Barton presents us with a 74-minute video interview with Gas...

Gamasutra brings word from Stardock CEO Brad Wardell that the company plans to offer their titles on Steam now that Impulse h...

In the third and final installment of his video interview, Matt Barton chats with Gas Powered Games' Chris Taylor on the rece...

Matt Barton released the second installment of his video interview with Gas Powered Games' Chris Taylor, in which Chris goes ...

Stardock CEO Brad Wardell notes it has been two years since the launch of Demigod, and is gathering consumer feedback on the ...

PC Gamer is next up to the plate with an interview with Stardock's Brad Wardell about GameStop's somewhat surprising acquisit...

The video game retailer GameStop has stepped into the PC Digital Download marketplace in a big way by purchasing Impulse, the...

Big Download has cranked out a new interview with Gas Powered Games' Chris Taylor, and while Age of Empires Online is the pri...

While there isn't any specific mention about Demigod or Elemental: War of Magic, Gamasutra is offering up an article-style in...

The Examiner is the latest website to chat with Stardock CEO Brad Wardell about their Impulse digital distribution platform, ...

Demigod For Less Than $5

Gas Powered Games' Demigod is far more strategy than RPG, but if you're looking for something new to play without forking out...

The official Elemental: War of Magic website has word that Civilization V lead designer Jon Shafer has joined the team at Sta...

Chris Taylor on the Future of PC Gaming

Gas Powered Games' Chris Taylor takes on the PC gaming naysayers in a new three-minute interview on G4, though he unfortunate...

In an attempt to bring you something a little different, guest writer Vlad Alexandru has penned an editorial that covers Warc...

Defense of the Ancients: Seven Years and Counting

"What is Defense of the Ancients, or in short, DotA?," you might ask. In case you did ask, I will take you on a little trip d...

A short interview with Gas Powered Games' Chris Taylor is up at RPAD.tv, and while there isn't any discussion about the Dunge...