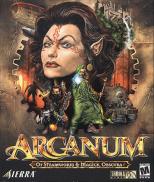 Arcanum, a spiritual follow-up to Interplayâ€™s Fallout games, was released in 2001 by Troika.Â  Set in a steampunk/fantasy world with a Victorian-era aesthetic, Arcanum is an open-ended CRPG with extensive character customization options and a huge game world to explore.

The player starts the game as a passenger aboard the IFS Zephyr, a zeppelin on its maiden voyage.Â  During its flight, it comes under attack, and crashes outside the village of Shrouded Hills.Â  The player, and a gnome named Radcliffe are the only two survivors, and Radcliffe dies shortly after the crash, living long enough to hand the player a silver ring and a vague message to deliver it to â€œthe boyâ€.Â  Things soon become more complicated as the player dodges multiple assassination attempts, is held up as the reincarnation of the Panarii religionâ€™s messiah, and becomes embroiled in a much larger plot.

Gameplay is highly similar to Tim Cainâ€™s previous masterwork, Fallout, and features open-ended exploration, extensive interaction with NPCs, freeform character creation, and largely replaces the moral compass of most RPGs with a magick vs. technology affinity, which will change depending on how heavily invested the player becomes in one school or the other, with high rewards for becoming a master of one, but consequences in the form of permanent weaknesses to the other.Â  Combat is either turn-based or real-time, depending on which the player prefers, with the turn-based system similar to the original Fallout games and the real-time system resembling action-RPGs like Diablo.

As someone who has to, on a regular basis, deal with plenty of RPGs and their oftentimes unwieldy titles, I couldn't help but...

To show everyone they mean business with this whole expansion into gaming thing they've been doing over the last few years, M...

Encumbrance in video games can be quite annoying, and as such, game designers are often tasked with solving this perceived pr...

Given his pedigree of role-playing game contributions that have spanned over two decades of design work, art direction, progr...

“An Unfortunate Affair a story by Sir Chadwick Moore,” reads one of Arcanum’s loading screens presented as a magazine c...

The editors over at PC Gamer have assembled a fresh list of what they consider to be the best RPGs currently available on PC....

During the previous episode of Matt Barton's Matt Chat show we got a sneak peek of Matt's interview with George Ziets, a vide...

The editors over at PC Gamer have recently put together an updated list of what they consider to be the best RPGs of all time...

Tim Cain and Leonard Boyarsky, the creators of the original Fallout and two of the co-founders of Troika Games, are currently...

In the third and final installment of his chat with Matt Barton, Leonard Boyarsky talks about his days at Troika Games and al...

Leonard Boyarsky Interview - Vampire, Diablo, and What's Next for Obsidian

Overlooked RPGs That Are Worth Playing Today

Over at PC Gamer you can find this list of overlooked RPGs that includes plenty of JRPGs and games that can be considered RPG...

Richard Cobbett, a well-known pundit when it comes to RPGs, has put together a comprehensive guide to PC RPGs, starting from ...

Richard Cobbett laments the lack of originality in RPG settings in his latest RPG Scrollbars column on Rock, Paper, Shotgun. ...

Tim Cain, a veteran developer and one of the founders of Troika Games, has recently delivered a keynote speech at the Reboot ...

Five Expansive CRPGs to Bide Your Time Until Torment: Tides of Numenera

After calling out that Planescape: Torment should be your first pick for PC-based adventures prior to diving into inXile's To...

People love "best of" lists. Knowing this, PC Gamer has provided a timely update to their best RPGs of all time list. The cri...

Choice in Gameplay: A Retrospective

The development of choice in RPGs is the subject of a long post over at Gamasutra, which charts a path from the ‘80s to...

His time at Sir-tech mastering Wizardry Gold for Windows-based PCs and the experience he had at Sierra Entertainment bringin...

Matt Barton continues to bring us fascinating interviews with key members of the video game industry, with his latest convers...

The folks at RPG Codex have put together a series of questions and forwarded them to Leonard Boyarsky, a recent hire at Obsid...

Arcanum: Of Steamworks & Magick Obscura Gets the Steam Treatment

It took the game quite a while to find its place on the biggest digital storefront for PC, but it's finally made it. Arcanum:...

The CRPG fans over at the Retrospective Gaming YouTube channel have turned their attention to Troika's Arcanum: Of Steamworks...

A Call for More Politics and Economy in RPGs

There's a new blog post by Felipe Pepe up on Gamasutra, in which he makes an argument and general request for an injection of...

While Diablo III fans may be heartbroken to learn that ex-Troika founder and industry veteran Leonard Boyarsky has left Blizz...

Journey to the Center of Arcanum Pitch Document Unearthed

In an interesting turn of events, unofficial patch author "Drog Black Tooth" posted on the RPG Codex what looks like a pitch ...

12 More RPGs That Brought Something New to the Table

Invigorated by the success of his previous blog for Gamasutra, Felipe Pepe has compiled another list, which this time compris...

It's been quite awhile since I last played through Arcanum: Of Steamworks & Magick Obscura, and if your play history clos...

I'm not familiar with the previous work of YouTube user Noah Caldwell-Gervais, but his recent video retrospective on Troika's...

PCGamesN has published a list of what they consider the best, or at least among the best, PC RPGs of all times, and while I h...

Obsidian's Chris Avellone is Finally Going to Play Arcanum, Watch Him Do It

One of the promises made during the Project Eternity campaign was that Obsidian Entertainment's Chris Avellone would finally ...

It seems like we missed the interview earlier, but GameStar.ru has chatted with RPG developer extraordinaire Jason Anderson, ...

For his latest industry interview, Will Ooi decided to talk with Tim Cain, veteran RPG designer and one of the founders of Tr...

Former Interplay, Troika and Carbine Studios designer and programmer Timothy Cain, which most of you probably know for his se...

Putting the RPG Back in MMORPG

Using Troika's steampunk RPG Arcanum: Of Steamworks & Magick Obscura as an example of meaningful choices and consequences and...

Activision RPGs 30% Off on GOG This Weekend

If you're interested in grabbing some old-school RPGs dirt cheap this weekend, Good Old Games has got a deal just for you. Al...

It's worth a reminder that the Good Old Games holiday sale is still ongoing, offering discount of up to 50% on many, many ti...

Windows 7 users who were having issues with the Good Old Games version of Troika's Arcanum: Of Steamworks and Magick Obscura ...

Good Old Games is hosting a new "community favorites" promotion, which provides a discount toward ten of their DRM-free title...

Arcanum and Vampire: Redemption on Sale at GOG

For their weekend sale, Good Old Games has bundled Arcanum: Of Steamworks & Magick Obscura and Vampire: The Masquerade - Rede...

The staff members over at RPG Codex have built upon their previous "RPG of the Decade" article by recognizing what they consi...

With Troika's original RPG offering receiving some additional exposure thanks to Good Old Games, it comes as little surprise ...

The Good Old Games/Activision partnership press release barely hit our inbox before Ausir from Polygamia let us know that the...

It seems that our guesses earlier in the week were wrong, as CD Projekt just sent us a press release announcing that they've ...

The Most Underappreciated Games of the Decade

Blend Games brings us a list of what they feel were the most underappreciated video games of this decade, and included among ...

Upon installing a fresh copy of Arcanum: Of Steamworks & Magick Obscura, one of the editors at Bitmob has discovered that Tro...

The MMO Gamer had the opportunity to conduct a lengthy interview with RPG veteran Tim Cain about the unnamed MMORPG he's cur...

After a two-year romance with Neverwinter Nights and Morrowind, with all their expansions, modules, and plug-ins, I found mys...

E3 isn't the biggest computer-oriented convention in the world, but for PC gamers, it might as well be. All the major game pr...