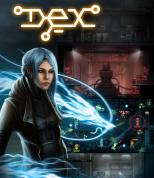 Dex is a story-driven action/stealth sidescrolling RPG with a fresh new vision of cyberspace. Explore the dark alleys of Harbor Prime and a host of diverse locations in both physical reality and the wild reaches of cyberspace. Discover the truth behind an enigmatic AI striving to reach the Singularity, a theoretical â€œevent horizonâ€ in which artificial intelligence will surpass human intelligence and all bets about the future will be off. How will you play your part in the story?

â€¢ Meaningful character progression choices: Will you be a silent assassin, a hacker, or a straightforward gunfighter? Improve your character and gear to unlock gameplay-changing upgrades that reinforce and customize your gameplay style.

â€¢ Unique hacking mechanic: Transfer your consciousness to your avatar, overcome intrusion countermeasures, take action, and then return back to your body in a fraction of a real-time second to see the results â€“ deactivated turrets, overloaded devices, enemies with crippled implants...

â€¢ Neo-cyberpunk: Story deeply inspired by the cyberpunk novels of William Gibson and other classical cyberpunk authors, flavored with a contemporary concept of augmented reality.

â€¢ Multiplatform development: Game is being developed in the Unity 3D game engine for PC (Windows), Mac, Linux, and OUYA.

â€¢ DRM-Free: Dex will be distributed DRM-Free, with an option to receive a Steam key (if we succeed on Greenlight).

The folks at GOG want to distract us from this summer's sweltering heat by offering us a chance to play a lot of heavily disc...

Dex, a side-scrolling cyberpunk action-RPG is receiving a free Demo version. In order to promote it, the game's developer, Dr...

Dex Coming to PS Vita and Wii U, "What is Cyberpunk?" Blog Entry

Following the cyberpunk RPG's release on Xbox One and PlayStation 4 back on July 8th, the team at Dreadlocks hit us up with a...

We've been well aware of the fact that Dreadlocks' side-scrolling cyberpunk RPG Dex would be coming to the PlayStation 4 and ...

Dreadlocks' side-scrolling, cyberpunk-themed RPG Dex is now officially available from GOG, providing us with yet another dig...

Those of you who prefer to scratch your RPG itch via a console rather than PC will be happy to learn that the team at Dreadlo...

Word comes via Dreadlocks' Facebook page and Steam's newsfeed that the cyberpunk action RPG Dex has officially graduated to a...

Dex Post-funding Kickstarter Update #38: No GOG For You

If you contributed to the crowd-funding campaign for Dreadlocks' 2D cyberpunk RPG Dex and were sitting tight until the DRM-fr...

The folks at Giant Bomb have produced a Quick Look video of Dex, which should help you decide if the side-scrolling cyberpunk...

The team at Dreadlocks has officially released their crowd-funded, action-heavy, and cyberpunk-themed RPG Dex, as indicated b...

Cyberpunk side-scrolling RPG Dex, from developers Dreadlocks, has been reviewed in its Early Access form from Eurogamer. Give...

The twenty-fifth update to Dreadlocks' Kickstarter campaign for their cyberpunk RPG Dex brings word that the game has officia...

With twelve days yet to go in the Kickstarter campaign, Dreadlocks' cyberpunk RPG Dex has surpassed its £14,000 funding goal...

The folks at Prague-based developer Dreadlocks have kicked off a new crowd-funding campaign for a side-scrolling, cyberpunk-t...