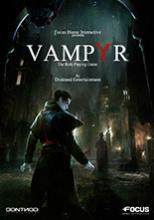 Vampyr is set in early 20th century Britain as the country is gripped by the lethal Spanish flu and the streets of London are crippled by disease, violence and fear. In a disorganized and ghostly city, those foolish, desperate, or unlucky enough to walk the streets lay prey to Britainâ€™s most elusive predators: the vampires. Emerging from the chaos, a tormented figure awakens. You are Jonathan E. Reid, a high-ranking military surgeon transformed into a vampire upon his return home from the frontline.

Explore the darkly atmospheric streets of early 20th century London, and interact with a multitude of characters with their own identities and importance. Accept and fulfill the missions they give you, but donâ€™t forget: sooner or later, you will have to feed, and make a difficult choice... who will be your prey? Absolutely all characters in the game are potential victims of your vampiric lust. Carefully study the habits of your next victim, his or her relationships with other characters, and set up your strategy to feed, unnoticed: seduce them, change their daily habits, or make sure they end up alone in a dark street...

Be careful who you choose to hunt, as they will be gone forever, and their death will impact in a meaningful way the world that surrounds you. Feeding on human blood will not just keep you "alive"; it will also unlock new vampiric powers to use.

There will be times when exploration and seduction will only get you so far, and you'll need to resort to engaging in Vampyr's dynamic real-time combat. It blends hard-hitting melee combat with ranged shooting mechanics and the supernatural vampire powers. You'll face many types of enemies: different species of vampires and creatures, as well as vampire hunters who want to hunt you down with their weapons, tools and traps. In Vampyr, your health and the "energy" that drives your supernatural powers are one and same! Using powers will drain your own blood, giving you an edge in battle but also leaving you weaker. You will have to find a way to feed during combat to replenish your strength.

Vampyr also offers a deep crafting system. Find and loot materials and components from the fresh corpses of your victims or during exploration, in order to craft and improve tools, melee and ranged weapons, as well as special ammunitions and coating to exploit the weaknesses of your enemies.

As you cling to what remains of your humanity, your decisions will ultimately shape the fate of your hero while searching for answers in the coughing, foggy aftermath of the Spanish Flu.

With another year behind us, the folks over at GOG.com share this article that looks back at the standout moments of 2019 in ...

If you visit GOG.com between now and November 4, 2019, you'll be able to purchase a great deal of heavily discounted horror-a...

Focus Home Interactive Is Having a Great Year

Focus Home Interactive, a French publisher specializing in AA games, a decent number of which tend to be of the role-playing ...

Call of Cthulhu and Vampyr Coming to Nintendo Switch

A couple of Focus Home Interactive-published RPGs that both happen to be set in the early 20th century will be arriving to Ni...

Focus Home Interactive, the publishers of many an RPG project including Vampyr, The Surge, and Call of Cthulhu, have revealed...

Hidden within Focus Home Interactive's H1 2018/2019 financial report are a number of statements regarding the record results ...

A while back we were promised a new update for Focus Home Interactive and Dontnod Entertainment's vampire-themed RPG Vampyr t...

Vampyr TV Series in the Works

Focus Home Interactive and Dontnod Entertainment's narrative-driven action-RPG Vampyr may be getting a TV adaptation in the n...

Dontnod Entertainment and Focus Home Interactive bring us the first update for their vampire-themed action-RPG Vampyr. This u...

Ahead of its imminent June 5, 2018 release, we get a stylish launch trailer for Dontnod Entertainment and Focus Home Interact...

If you needed a reason (or five) to look forward to the upcoming E3, you might be interested in this announcement on Focus Ho...

Vampyr, Dontnod Entertainment and Focus Home Interactive's upcoming action-RPG, will be launching in roughly a month, on June...

If this making-of video is anything to go by, Dontnod Entertainment's upcoming action-RPG Vampyr will at the very least have ...

The fourth and final episode of the "Dontnod Presents Vampyr" webseries brings us some fresh gameplay footage, tells us how t...

The "Dontnod Presents Vampyr" webseries continues with a new episode (here's the first and the second one) that focuses on Do...

The first part of the Dontnod Presents Vampyr webseries focused on the game's protagonist and the strange, mystical world he ...

The first part of the weekly Dontnod Presents Vampyr video series is here. It offers some insights into the developer's creat...

Focus Home Interactive and Dontnod Entertainment's action-RPG Vampyr will be launching sometime in Spring 2018, and in prepar...

Head on over to PC Gamer and you'll find a pretty extensive list of RPGs set to be released in 2018. From such noteworthy tit...

With a thoroughness that can put to shame most of their peers, the folks at TechRapor looked back at the RPGs of 2017. Even C...

MCV is offering up two separate interviews about the upcoming horror-themed RPG Vampyr, the first of which is with Dontnod's ...

Although it was originally slated for a November release this year, Focus Home and Dontnod shared the disappointing news toda...

You've recently had the chance to peruse a number of Vampyr E3 previews, and now it's time for a couple of fresh interviews w...

This year's E3 should be the last one to pass before Focus Home and Dontnod's blood-soaked Vampyr title is released to the ma...

In case you wanted to see some actual gameplay from Dontnod Entertainment's action RPG Vampyr, this year's ongoing E3 brings ...

Polygon has a new editorial-style interview with Dontnod Entertainment's developers working on Vampyr, a third-person Action-...

Thanks to some digging done by the folks at WCCFTech, we now know that upcoming Focus Home Interactive RPGs, Vampyr and Call ...

Vampyr "The Darkness Within" Trailer

The holidays wouldn't be quite complete without at least a brief foray into the macabre, right? And we get to do just that w...

Since the last time we checked, Richard Cobbett has published two packed columns for Rock, Paper, Shotgun, dealing with the R...

Dontnod on Female Protagonists and Vampyr

GamesIndustry.biz is offering up an interview with Dontnod CEO Oskar Guilbert about the company's use of a female protagonist...

The team at Focus Home has doled out about 14 minutes of pre-alpha gameplay footage for Vampyr, DONTNOD's upcoming vampire-th...

Despite the fact that the show concluded nearly two months ago, we're still able to do some light reading about Dontnod's RPG...

We've put together a new round-up of impressions for Vampyr, DONTNOD's latest upcoming title and their first action-RPG, st...

Now that E3 2016 is behind us, it's time to take in a deep breath and pick through the thousands of articles that have emerge...

The excitement level for Focus Home and Dontnod's horror-themed RPG Vampyr is likely going to increase with the debut of a ne...

While we'll upload these screenshots on our gallery soon, I'd be remiss not to mention that some new shots of Vampyr are avai...

DONTNOD Entertainment's horror-themed RPG Vampyr is the subject of a brief new interview on Examiner, during which game direc...

The folks at GameWatcher have published a new interview with the Dontnod developers who are currently working on Vampyr, a va...

We have rounded up a number of previews for Vampyr, Dontnod's upcoming vampire-themed action-RPG, which were all based on han...

Focus Home and Dontnod Entertainment some new artwork along with the very first set of screenshots from their upcoming London...

There's a developer commentary-laden preview for Vampyr up on PCGamesN, where Dontnod's StÃ©phane Beauverger and Gregory Sz...

It's been almost six months since we heard anything about Vampyr, an RPG developed by DONTNOD (Life is Strange, Remember Me) ...

DONTNOD Entertainment has published a "concept teaser" video for Vampyr, the gritty action RPG they're developing for Focus H...

Vampyr, an action-RPG from DONTNOD Entertainment, the French studio behind Remember Me and the upcoming Life is Strange, has ...